What is Worship?
It's all about service!

Lutherans approach worship in a much different way that many other Christians.  Many think of our time together on Sunday morning as a sort of obligation, something we must do to show our love for God, something He needs from us.  Nothing could be farther from the truth!  As Scripture teaches us, worship is all about Jesus Christ coming to us through His Word and Sacraments to bring us His forgiveness and His Holy Spirit who strengthens our faith.

The direction of Lutheran worship is from God to us.  We then respond with thanksgiving to what He has given us.  Fed by Him and strengthened for life in this world, we go out and live faithfully in our vocations, those places in which the Lord has placed us—in our communities as those whose work benefits our neighbor, and in our homes as parents, spouses, children, and the like.

Because Christ is at the center of all we do, we do not often refer to our time together as "worship," because this places an emphasis on what we do.  Rather, we refer to what happens as the Divine Service, because it reflects what takes place: our God serves us and delivers all His Gifts to us freely and lavishly. 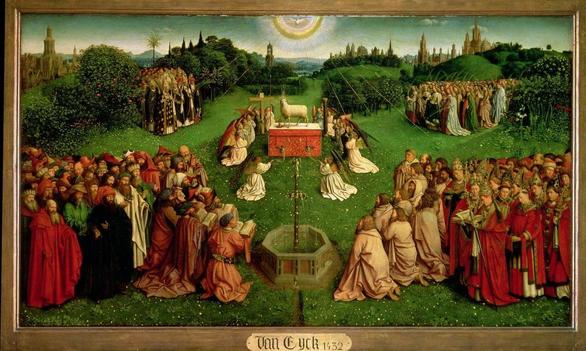 Why is it important to come to church regularly?

The Divine Service isn't just a ritual or spiritual exercise that you go through because it’s how you were raised.  When you think about what the Divine Service is really about, it comes down to two things: The deliverance of Jesus Christ Himself in Word and in action.

But both of these things go inseparably together.  If you hear but don’t receive, or if you receive but never hear the Word, you’re only getting half of what Our Lord gives in the Divine service.  Some may think half is good enough, only hearing or only partaking of Holy Communion, but it’s only half of Our Lord.

In the Lord’s Prayer you pray, Give us this day our daily bread; forgive my sins; lead me not into temptation; deliver me form evil; protect, strengthen, guide, and comfort me. Where does Our Lord answer this prayer?  In the Divine Service!  How does He answer this prayer?  By giving Himself to you fully in Word and Sacrament!  The Divine Service is where the Lord daily loads you with benefits.  What is better than the Lord’s forgiveness and compassion?  What is better than being so intimately united to God that He comes and makes His dwelling in you?  He dwells in you and you in Him.  That doesn’t happen anywhere else!

So it’s fair to say that the Divine Service is all you need to live.  When you say that, you say that nothing else in life matters, not just because it pales in comparison or because life is not worth living without God’s love in Christ, but because your entire life is dependent upon the love Christ delivers into you.  Without His mercy delivered in Word and Sacrament, there is no life for you, or the world.

The Divine Service is the most important thing in life for the Christian because it’s the only thing that gives you a life worth living.

What is "liturgy" and why does Epiphany use it?

The liturgy, or "order of service," is what the Church has used in the Divine Service from the beginning.  The Temple followed a very structured pattern for everything that happened, prescribed by God and preserved through the ages.  It is only natural that the Christian Church maintained this same sense of order and structure.

The First Apology of Justin Martyr, written around 150 AD, shows the rhythm of the Divine Service:
"And on the day called Sunday, all who live in cities or in the country gather together to one place, and the memoirs of the apostles or the writings of the prophets are read, as long as time permits; then, when the reader has ceased, the president verbally instructs, and exhorts to the imitation of these good things.  Then we all rise together and pray, and, as we before said, when our prayer is ended, bread and wine and water are brought, and the president in life manner offers prayers and thanksgivings, according to his ability, and the people assent, saying Amen; and there is a distribution to each, and a participation of that over which thanks have been given." (Chapter 67, Weekly Worship of the Christians")

This shows a very familiar pattern: Gathering on Sunday, the Scriptures are read, after which they are explained and applied to our daily life (preaching).  After this, prayers are said for ourselves and others.  After we pray, we partake of the Lord's Supper, the Body and Blood of Christ given with bread and wine.

Lutherans use the historic liturgy of the Church because we are not a sect or an independent body, but are a part of the true Church, and in all we do we show our unity with the Church of all times and places.  To this end, the Lutherans confess in Article 24 of the Augsburg Confession, "Our people have been unjustly accused of having abolished the Mass.  But it is obvious, without boasting, that the Mass is celebrated among us with greater devotion and earnestness than among our opponents. The people are instructed more regularly and with the greatest diligence concerning the Holy Sacrament, to what purpose it was instituted, and how it is to be used, namely, as a comfort to terrified consciences.  in this way, the people are drawn to Communion and to the Mass."

Though Lutherans were accused of breaking with the Church and creating their own service (Mass), we prove that those accusations are false by conducting ourselves as the Church always has, with the greatest reverence as we are gathered around the Body and Blood of Christ.

What is the Lord's Supper?  Who can receive it?

Epiphany normally gives the Lord's Supper to those who are Baptized and Confirmed.  Under no circumstances may an unbaptized person commune.  However, because Jesus never gave a "minimum" age for one to receive the Lord's Supper, Epiphany's practice is to offer the Lord's Supper to children who have not yet been Confirmed, but are able to confess the Christian faith, are aware of their sin and repent of it, and recognize that what they receive to eat and drink is the very Body and Blood of Jesus Christ.  You can read more about Epiphany's Early Communion policy here.
Click here for a fuller explanation of Communion Practice in the LCMS